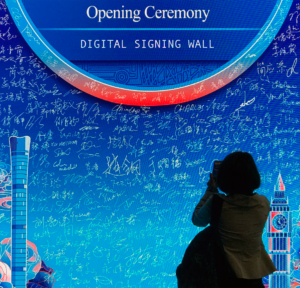 For a global bank opening ceremony we created this interactive signing wall.

Delegates signed a tablet as part of their registration to the event. Then when they were in the main drinks reception area for the event they could see their signature placed on a backdrop on a large LED wall.

The effect was a corporate digital signing wall that retained the organic look of a graffiti wall. It produced an engaging piece which delegates used as a great photo opportunity.

Our media server was setup with a remote access web server interface, meaning that the tablets could remotely login and upload the hand drawn signatures where they were dumped in a folder on the server.

Our in-house specialist programmed a custom piece of interactive software which would then take the signature file, process the colours and then offer live control in order to place the image on the background with controls for scale and rotation. The initial plan was to have the signatures placed automatically, but we found that they became too uniform and having the human element of selecting where they were placed retained the organic look as if they had actually been drawn directly onto the wall.

This was then updated onto a 2.5mm pitch LED wall, giving a high enough resolution to keep the signatures looking crisp

At the end of the event we were left with a completed image which could be sent to the client for use in their post-event documentation and for press.

This is a highly adaptable concept. Here are some ideas:

If you'd like us to help plan your event, please get in touch.

PR Live are specialists in innovative solutions, integrating disciplines to use technology to truly meet a technica… https://t.co/DrnBDl0aNK

For this visually stunning interactive event in the @thevinylfactory in Soho. We provided a range of equipment incl… https://t.co/a3B7MObB1a

Jackpot! For @lorealparisuk brands @NYXcosmetics_UK @essie @maybelline we provided screens and playback for this e… https://t.co/jTwYbpTUQa

Little tidy up of the yard this , v pleased with the results.@smartsealuk products used. https://t.co/2ldfVH6LeR

We use cookies on our website to give you the most relevant experience by remembering your preferences and repeat visits. By clicking “Accept All”, you consent to the use of ALL the cookies. However, you may visit "Cookie Settings" to provide a controlled consent.
Cookie SettingsAccept All
Manage consent

This website uses cookies to improve your experience while you navigate through the website. Out of these, the cookies that are categorized as necessary are stored on your browser as they are essential for the working of basic functionalities of the website. We also use third-party cookies that help us analyze and understand how you use this website. These cookies will be stored in your browser only with your consent. You also have the option to opt-out of these cookies. But opting out of some of these cookies may affect your browsing experience.
Necessary Always Enabled

Performance cookies are used to understand and analyze the key performance indexes of the website which helps in delivering a better user experience for the visitors.

Analytical cookies are used to understand how visitors interact with the website. These cookies help provide information on metrics the number of visitors, bounce rate, traffic source, etc.

Advertisement cookies are used to provide visitors with relevant ads and marketing campaigns. These cookies track visitors across websites and collect information to provide customized ads.

Other uncategorized cookies are those that are being analyzed and have not been classified into a category as yet.

SAVE & ACCEPT
Powered by